When I first knew I had PTSD

In 2007, I was sitting on a sofa in Tampa, Florida, roughly about a week after my last Iraq deployment. My then fiancé Jessica and I were watching a very graphic horror movie from the SAW series. My vision filled with white and somehow, I was back in the driver’s seat of a “Humvee” in Zafaraniyeh Baghdad. Driving as fast as I could to FOB Rustamiyah after a roadside bomb attack. I drove while Eric’s eyes faded from blue to lifeless gray on the hood of my truck. Rami’s dead body lay behind me in the back seat, his face had been blown off. The radios looked fine, but were useless after the blast. The smells, tastes, fear, and rage were all there. During this flashback my whole body was convulsing like I had epilepsy. I made sounds that were not words. Jessica initially thought I was messing around, until she saw my eyes. She was scared. I was somewhere else for a period of time, and then I was back with her again. We talked about what happened and there was no doubt in our minds war changed me. 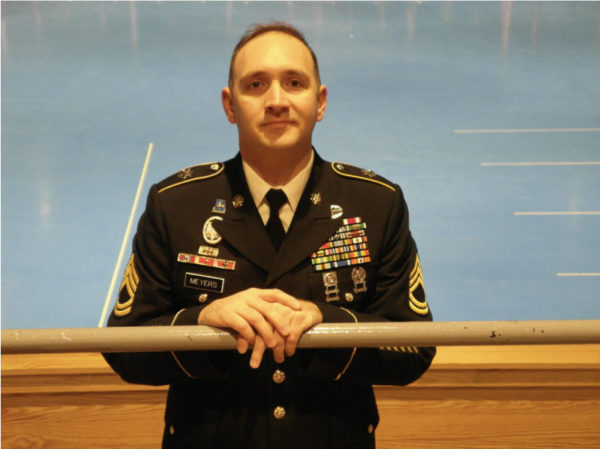 SFC Meyers at his retirement Ceremony in 2016

Steve is the eldest of 5 children from 4 men. He was raised by a single mom in the low-income neighborhoods of Southern California. He went through his childhood with a chip on his shoulder and struggled with the more refined elements of society. His family moved several times during his childhood and he attended 4 different high schools in order to get his diploma from Poway High in 1994.

At age 18, in 1994 he joined the California Army National Guard. In 1996, at age 20, he transferred to the United States Army. When asked why he joined the Army, Steve tells people he joined so he could have a place to live. His family endured several crushing defeats in the early 1990’s that culminated in 1995 with the Matriarch of the family dying of bacterial meningitis. Steve was living with her when she died.

He retired from the United States Army in 2016 as a SFC/E-7 after serving 22 years. He deployed 7 times to Imminent Danger Pay Areas (Bosnia 1996-1997, Turkey 2003, Qatar 2005, Iraq 2005, 2006-2007, Egypt 2011-12, Afghanistan 2013) During his first deployment in 1996 he contracted Tuberculosis in Bosnia-Herzegovina and had to be treated twice to make sure it was gone. Events from the 2006-2007 Iraq deployment deeply troubled him. Back then, it was common knowledge that if you sought mental health treatment, your security clearance would be in jeopardy. So, Soldiers like Steve suffered in silence. He held a TOP SECRET clearance from 1999-2016.

In December 2007, his fiancé Jessica was diagnosed with stage IV colon cancer.

In 2008 the U.S. Army changed the security clearance policy, allowing Soldiers with mental health issues to receive care without losing their job. Steve used the opportunity and sought help on 26 March 2008. His trust was betrayed and he refused to seek help again.

2009 was a rough year for Steve. He lost a half-dozen family members, to include his wife Jessica Meyers, who died of colon cancer in July. In late October 2009 he suffered a broken back when a tent fell on him during a field training exercise. His back never fully healed and he deals with chronic pain. In December 2009 he had suicidal thoughts and he gave away many of his possessions. He declined consideration for promotion from 2009-2016.

30 January 2015, Steve got help for his mental health for the first time at a Veteran’s Center after his girlfriend Vicki kept urging him to get help. If he had received help when he first sought it, his PTSD would likely be a shadow of the past by now.

Untreated wounds fester and become bigger problems later. Have courage and treat them when they are small and easily managed.